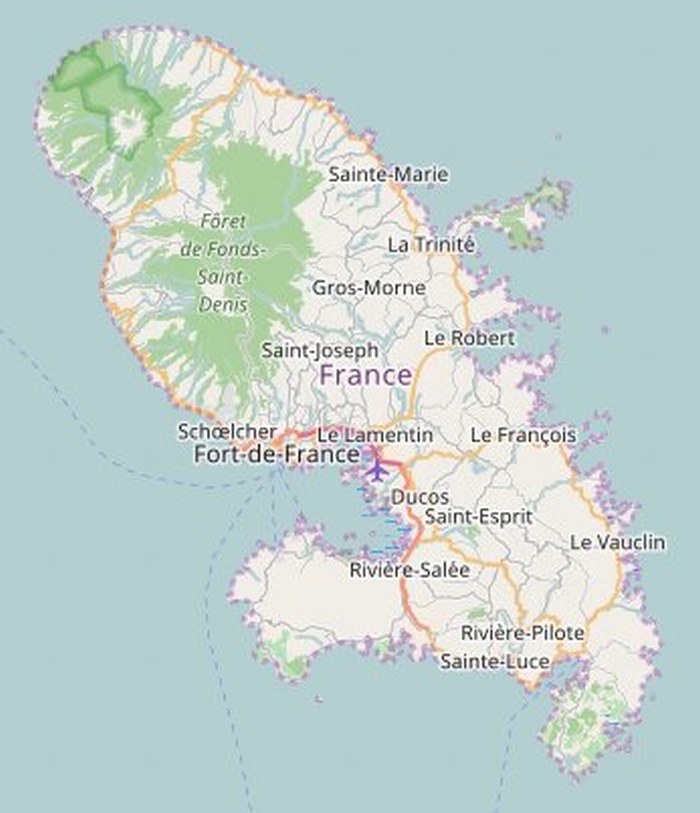 Martinique (called in the Creole language Madinina, the island of flowers) is an overseas French department, ideally situated in the heart of the Antillean arch (14° 40' North 61° West) between Dominica to the North (40 km) and St.Lucia to the South (30 km), between the Caribbean Sea and the Atlantic Ocean.It's land area is 1080 km2, with a maximum lenght of 80 km and a width of 39  km and the closest point to the sea is not more than 12 km. The island's landscape is made up basically of volcanic mountains, lush hills and beaches featuring white and black sand. In this part of the world,the duration of the day and night is almost equal all year round and the sun shines an average of 8-9 hours a day depending on the season; it rises fast (between 5:30 and 6:30) and sets even faster (between 5:30 and 6:30).

Martinique enjoys a marine tropical type climate distinguished by mild temperatures as well as by an excellent ventilation (mean temperature 26° C or 78° F). The dry season runs from the end of November to the middle of June (le careme), whereas the rainy season is from June to December (l'hivernage). In the dry season, the weather is generally good, the flow of the trade winds is regular, the days are mild and the air is dry.This is the best time to vist the island and the Caribbean in general. In the humid season, the days are hotter and stickier, the trade  winds are weaker and the rains are more frequent and severe. Cyclones and hurricanes may hit, even though are uncommon.